On Friday week ago I went to London to do two things – to see the pre-Raphaelite paintings in Tate Britain, and to hear Angela Gheorghiu sing. I have been reading Kathryn Hughes’ book Victorians Undone, and was in the middle of the chapter on Fanny Cornforth, one-time or the other the model, muse, lover, housekeeper and dependent of Dante Gabriel Rossetti, and feeling the pull of the 19th century art display. Fanny Cornforth was the strawberry blonde one – the one rejected by history for being too loud, too vulgar, too sexual, too fat, just generally too embarrassing, especially next to the virtually mute, emaciated Elizabeth Siddal (the dark ginger), who managed to persuade Rossetti into marrying her 1860, and the clever, self-sophisticated Jane Morris (the brunette) for whom Rossetti left Fanny at various occasions – and somehow still made his way back to, even if she was aging (she was, shock horror, 48 when Rossetti died, five years his junior) and becoming a bit, you know, stout.

I have loved the pre-Raphaelite art for a long time, ever since I first read A.S. Byatt’s Possession – long before the Everyman’s Library edition and the movie tie-in, it used to possess Edward Burne-Jones’ The beguiling of Merlin as a cover image. It also featured as its Victorian lovers two imaginary poets, Randolph Henry Ash and Christabel LaMotte – there are probably plenty of more educated guesses on whom they are based on, but they always made me think of Algernon Charles Swinburne (friend of the original bro Gabriel Rossetti) and Christina Rossetti (sister of Gabriel), whom I have read often over the years. But beyond marveling the pictures – heavy with the sort of Victorian symbolism that means almost nothing to most of us today, astonishing in detail, and in turns lush with sensuality and completely barren – I had never thought about the world in which they were created, about the real women portrayed, much. I knew their names, of course. Or rather, I knew the names of Elizabeth Siddal and Jane Morris (who was born here in Oxford; a blue plaque marks the building where she started out as laundress), but while I had seen the picture Bocca Baciata, I had never heard of the name Fanny Cornforth until I picked up this book. She turns out to have been beautiful in a wholesome, country-girl way; a blacksmith’s daughter born at a time that was not kind to working class women – being forced to work as a servant in a lodging house (a position distinctly lowlier than being a maid in a private, upper class household) early on ruined her chance of a decent marriage, leaving her few options beyond finding a way to make her beauty work for her. She went to London, where her greedy table manners attracted the attention of Rossetti on day; she denied every having been a prostitute, but she almost certainly was from the get-go hoping to find a man to keep her.

She wasn’t intelligent, she wasn’t sophisticated, and she refused to change just to please Rossetti’s circles. She also seems to have been without talent of her own, unlike Siddal who became accomplished herself as a painter (albeit in small scale), or Morris who went from a seamstress to an embroiderer and designer. She was, in short, a good-time girl and whatever her inner life was about, she probably was given neither the space nor the tools to express it. Still, while Lizzie Siddal with her laudanum habit and emotionally manipulative manner sounds like a bit of a pill, despite all her sophistication, Fanny actually sounds fun. She was probably sweet and charming, she cared for Rossetti very much and was probably remarkably low maintenance compared to the other important lovers he had. Rossetti’s style of painting changed radically when he met Fanny; Bocca Baciata has none of the religious severity of Beata Beatrix – it’s almost like Rossetti has bitten the apple he is painting, and rather than something bad happening, it has opened up this lush, new paradise for him.

After Rossetti’s death, his brother and various friends seeked to wipe Fanny out of the narrative. Unlike the long-dead Siddal and Jane Morris safely away in the country, Fanny had been present in Rossetti’s life almost to the end, but now it was time for her to go. His brother William edited as much as he could of her out of his life; he and Rossetti’s friends were set on diminishing her presence as much as they could. Later scholarship has passed over Fanny as well; she has been both overlooked and inconvenient, and if she’s enjoying renaissance, she deserves it.

Adriana Lecouvreur is story of another “fallen woman”, and David McVicar’s production another sumptuous feast to the eye. This 1902 opera is not terribly exciting on its own, and the story is incomprehensible (after sleeping three nights on it, I finally figured out who Madame Duclos is and how she – maybe – connects to the plot), but I loved it, for a myriad of reasons.

Adriana tells a story of a celebrated actress, in love with a man who is told – but not really shown – to return her feelings. Her lover is two-timing her with a princess, who in jealous rage poisons her. Adriana herself in turn is loved by stage manager Michonnet, too demure to declare his feelings to her. Adriana, like Fanny, is a sweet girl, passionate in nature and utterly nice, while Michonnet is sympathetic, sweet and melancholic, and at least with Gerald Finley in the role you sort of wish Adriana saw the sense and fell for him instead of the promiscuous count. McVicar has staged this 18th century tale in period, using a rather clever, visually spectacular stage-on-stage set. The first act happens all in the wings, while on the stage Adriana acts to an invisible audience in the wings of the real stage. Later on, on the same stage the Royal Ballet dancers perform world’s most cramped pastoral while the singers watch sitting on “stalls” – as the drama between the main characters unfolds, the princess fatally discovering the identity of her romantic rival, the dancers get increasingly frustrated by the lack of attention and eventually leave. The creak of the stage and its cardboad sets and the smell of greasepaint are palpable, the real candles flicker in the brass sconces, and somehow it all works wonderfully. I had originally booked the ticket for the big name stars – Angela Gheorghiu and Gerald Finley – but they turned out to be just a one part of a thoroughly enjoyable evening.

I haven’t uniformly loved everything by McVicar I have seen. The ENO Rosenkavalier, yes. The Glyndebourne Giulio Cesare, yes. The ENO Medea, not so much. McVicar has a flair for spectacle, and occasionally he sidesteps to the territory of ridiculous, but here everything was just right. I had a standing ticket, but my right leg going numb found me sneaking into a a free stalls circle seat, and there in the darkness of the ROH auditorium, the stage set with real candles and panniers and fantastical costumes, I found myself feeling rather whimsical – “this is opera“, that sort of thing. It this production is revived again, you’ll find me there again.

I have heard and loved Finley before, and he was exquisite again. The tenor, Brian Jadge, had a beautiful, effortlessly big voice and a very pleasant presence. The sort of young(ish) singer whose name you want to memorise for future reference. And Angela – what can one say of her? The voice is small, and diction still occasionally hilarious, but at the same time there is an astonishing beauty to it, the notes ringing like small silver bells. The audience has rarely been quieter, more intent on listening. 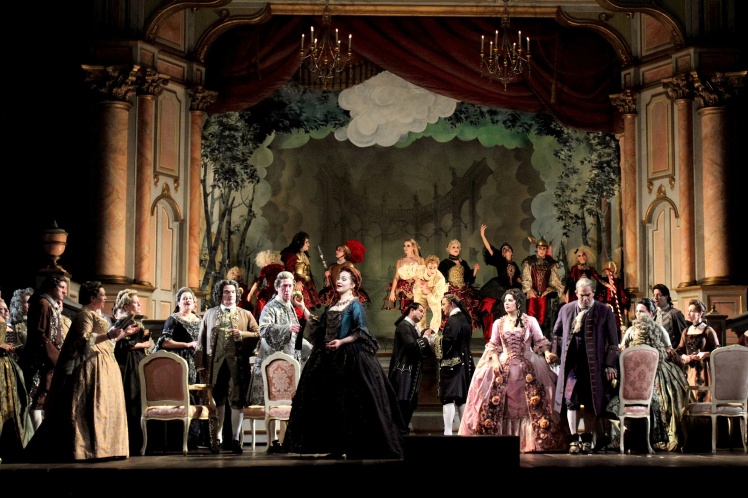 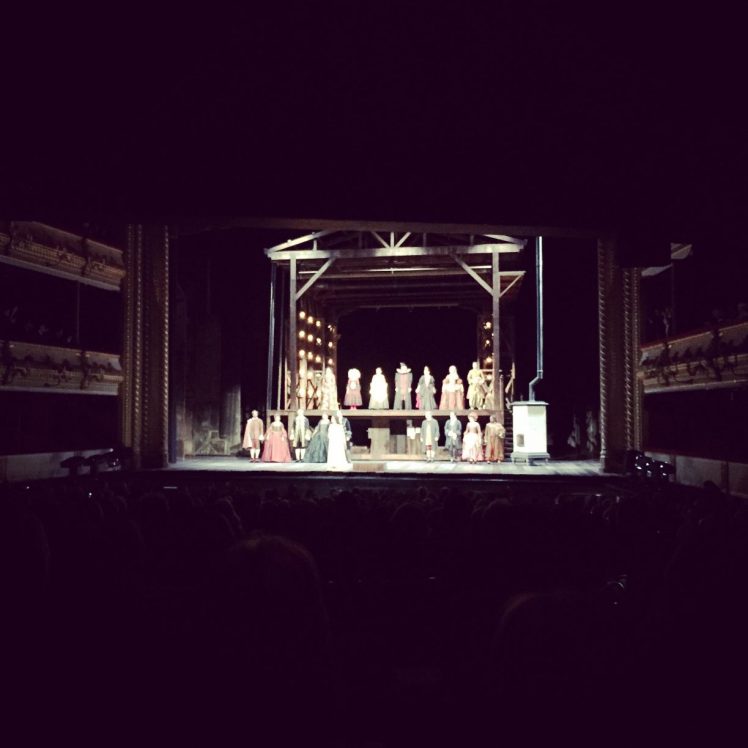 The only picture of Fanny Cornforth on display at the Tate Britain is a small pencil drawing in the top floor gallery of pre-Raphaelite drawings and works by William Blake. The bigger oil paintings have, I think, all been bought by various American collectors and museums; Bocca Baciata is on display in the Museum of Fine Art in Boston, Ma. The Tate Britain has a small collection of some wonderful pre-Raphaelite paintings though, including Rossetti’s The Annunciation (modeled by his sister Christina and often considered the first work created within the movement)  and John Everett Millais’ Ophelia. The 1840s room in itself is a delight.