The fault, dear Brutus, is not in our stars, but in ourselves.

This is one of the several Roman plays Shakespeare wrote, and although it is an independent work in all essentials, it does loosely connect to his later play Anthony and Cleopatra. Julius Caesar is the axial character in this play, but he is in terms of presence on the stage a minor one – he appears only in few scenes, and the famous murder happens at the beginning of Act 3. This is a play about power, real and imaginary, and about those who have it and those who want it.

The play in its basics tells a historically accurate story of the end of Julius Caesar’s life and death. Caesar has defeated his co-ruler and old friend Pompey the Great; he returns to Rome in triumph and is offered the throne, but there are dark portents. A soothsayer tells him to “beware the Ides of March” while his wife Calpurnia has dreamt about his death. Cassius interprets a spell of freak weather and other unusual events as bad omens. During the Ides, a band of conspirators stabs Ceasar; one of them is his close, trusted friend Brutus. As Caesar dies in the first scene of Act 3, the rest of the play deals with the fallout of the assassination – how Rome descends into chaos and war, innocent people die, and how the co-conspirators, having failed to justify their acts and get the support of the people of Rome, turn against one another and go into their own, inevitable deaths. Cassius, Titinius and Brutus all kill themselves, and Mark Anthony, having seen an opening, seizes the power for himself. 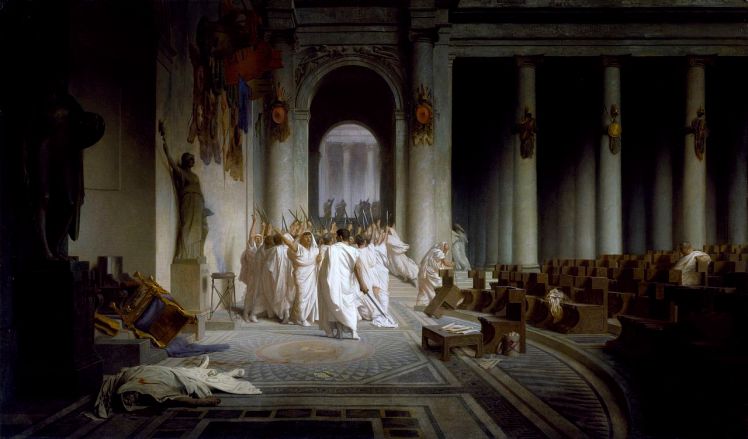 Caesar is the controversial character here – we don’t know if he’s a great leader and a good man, or simply a charismatic tyrant, and Shakespeare is careful to maintain that ambiguity, by simply not showing us enough of him to form an educated opinion. Brutus loves him, but agrees that he must die for some poorly defined greater good. Cassius’ opinion is coloured by his jealousy – he describes how he has witnessed Caesar’s human, physical weakness, his “falling sickness” (presumably epilepsy), and yet as the emperor this weak man, this man made undeserving by his perceived frailty, is to be an emperor and a god.

Brutus, aware of the horror of what they are doing, is trying to justify what they are doing with reasons patriotic and noble, put himself apart from the petty envy of his fellow men. It is almost as if Shakespeare is asking if it is acceptable to kill the emperor, and if yes, for what reason. Is Brutus really more noble for raising his dagger and shouting “peace, freedom, and liberty”, smeared up to his elbows in blood, than the senators who participate in the murder after being swept into Cassius’ vitriolic campaign of jealousy? He is close to Caesar, loving him as though a brother or a father, and his participation in this conspiracy is even graver a betrayal than that of the others’; both his inability to tell about the conspiracy to his wife, and his vision of Caesar’s ghost show his uneasy conscious. 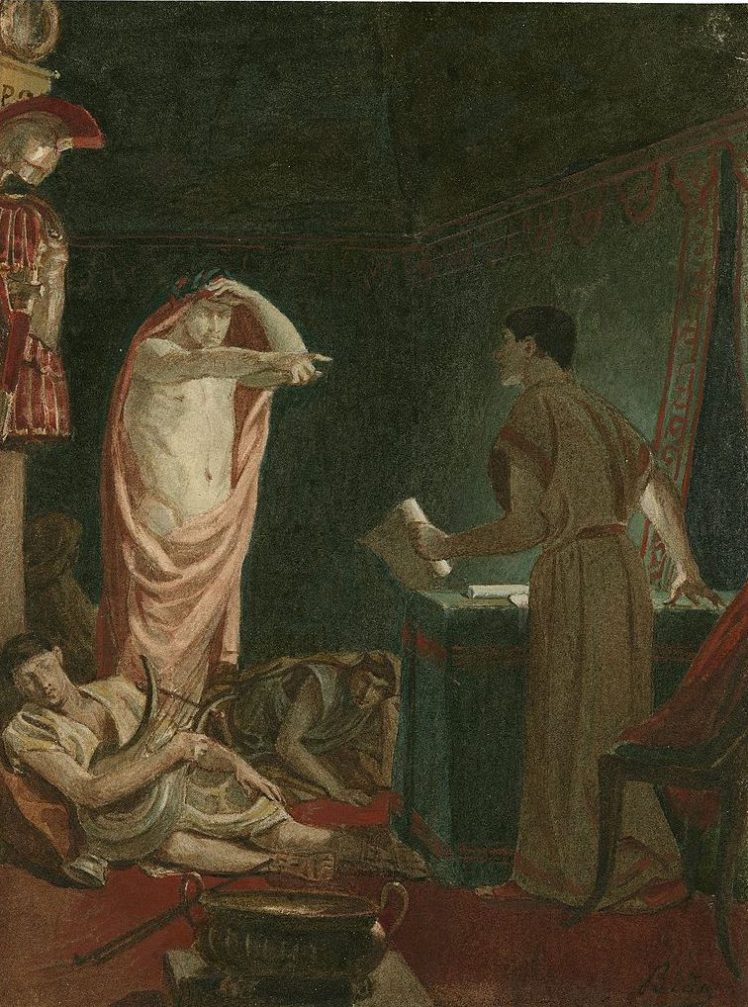 Shakespeare’s political plays are regularly said to be relevant because of their timeless themes of power – desire for power, being corrupted by power, blinded by power, weary of power – and those elements are there in Julius Caesar. The modern parallels are aplenty – the political (if not physical) assassination of Margaret Thatcher in 1990 perhaps being the most obvious. Shakespeare’s questioning of the justification for the murder of a monarch would have had a source close to home though – Queen Elizabeth I’s reign was in its final years, and marked by mounting criticism and declining public affection for her. Her government was more hostile to her, and she came to rely on spies and desperate propaganda. No doubt by 1599 when Shakespeare wrote the play, there were many who felt that the Queen had become a burden for her nation and that her removal would have served the greater good Brutus speaks of.

In the Time magazine poll, Julius Caesar was voted the 6th best Shakespeare play. It is definitely an excellent one, not just as a study of power and politics, but also because of its language (see below).

As far as we know, the real Caesar’s final words were not “Et tu, Brute?” – in fact, there’s no scholarly consent of what, if anything, he said. Shakespeare came up with that line, and it has become a part of a sort of colloquial history.

Also, Julius Caesar was the first play to have been staged in the original Globe Theatre, which opened in 1599.

Julius Caesar is not a play one immediately thinks as one of Shakespeare’s more quotable, but it’s actually full of goodies. John Green got the title of his novel The fault in our stars from this play, as did Agatha Christie the title of Taken at the flood. We ask Et tu, Brute? and the Dowager Countess unleashed the dogs of war because of Julius Caesar. Lend me your ears, beware the Ides of March, “Friends, Romans, countrymen”, and it is Greek to me all come from this play. There are too many fine quotes to pick just one, so here are a few:

When beggars die, there are no comets seen; the heavens themselves blaze forth the death of princes.

The evil that men do lives after them;
The good is oft interred with their bones.

Bid me run, and I will strive with things impossible.

But I am constant as the Northern Star,
Of whose true fixed and resting quality
There is no fellow in the firmament.

I have not slept.
Between the acting of a dreadful thing
And the first motion, all the interim is
Like a phantasma, or a hideous dream:
The Genius and the mortal instruments
Are then in council; and the state of man,
Like to a little kingdom, suffers then
The nature of an insurrection.

What a terrible era in which idiots govern the blind.

But men may construe things after their fashion, Clean from the purpose of the things themselves.

…for the eye sees not itself,
but by reflection, by some other things.

The finest quote of all though is surely Caesar’s brief speech to Calpurnia in Act 2 scene ii about the quality of bravery:

Cowards die many times before their deaths;
The valiant never taste of death but once.
Of all the wonders that I yet have heard,
It seems to me most strange that men should fear;
Seeing that death, a necessary end,
Will come when it will come.

This is a hard call, actually. Reading this play, I inevitably think of one of these guys as Caesar, and hence love him dearly (and refuse to be embarrassed):

But purely as a written character in this play, one will have to go with Brutus – weak, horrified Brutus trying to justify his murder and betrayal of the man he professed to love.

Shakespeare’s Globe production from 2014 – all neatly cut, elegantly decorated togas over Elizabethan costumes and eager but not particularly profound acting (many of the best lines sort of disappear, as the actors don’t quite rhythm their speech right). I really wanted it to work, but it quite doesn’t.