The fool doth think he is wise, but the wise man knows himself to be a fool.

As You Like It is often considered one of Shakespeare’s best comedies – if not the best. It is certainly important enough to have given name to the series of scholarly editions of his plays, The Arden Shakespeare (which I’m reading from at the moment). It is often described as “pastoral” – most of the action is set in the Forest of Arden, where Rosalind and Celia, and Orlando escape after being banished. This forest is an Arcadia, a sort of magical idyll that offers freedom, shelter and nourishment to those who seek to escape there, an ode to the wholesome delights of country life.

In the framing storyline, Duke Frederick has usurped the duchy from his Brother, imaginatively called Duke Senior, and sent him into exile. He has however allowed his niece, Rosalind, to stay as companion to his own daughter Celia. Orlando, the love interest and other protagonist, is being persecuted by his older brother Oliver. Rosalind and Orlando meet, fall in love at first sight, and are parted again. Orlando, after his brother sets a wrestler to kill him, flees to the Forest of Arden, where Rosalind and Celia also end up after Rosalind is banished by Frederick. In a true Shakespearean style, Rosalind and Celia disguise themselves – the former as a boy called Ganymede and the latter as a peasant girl Aliena. Inevitably they bump into Orlando who is going around theatrically pining for Rosalind and writing bad poetry, and she gently mocks him for being in love so ardently, suggesting that he court “him” as he would Rosalind, to cure him from this affectation. He agrees, and even goes as far as to “marry” Ganymede in Rosalind’s place. Along the way Orlando meets Duke Senior, Ganymede and Aliena meet Phoebe (who falls in love with Ganymede) and Silvius, Touchstone meets Audrey, Aliena meets Oliver, who is attacked by a lion and rescued by Orlando, Frederick repents, and Ganymede agrees to “deliver Rosalind” to Orlando. Duke Senior is restored into his rightful position (and he forgives his brother, who retires into religious life), as is Orlando, and all the right couples end up marrying. 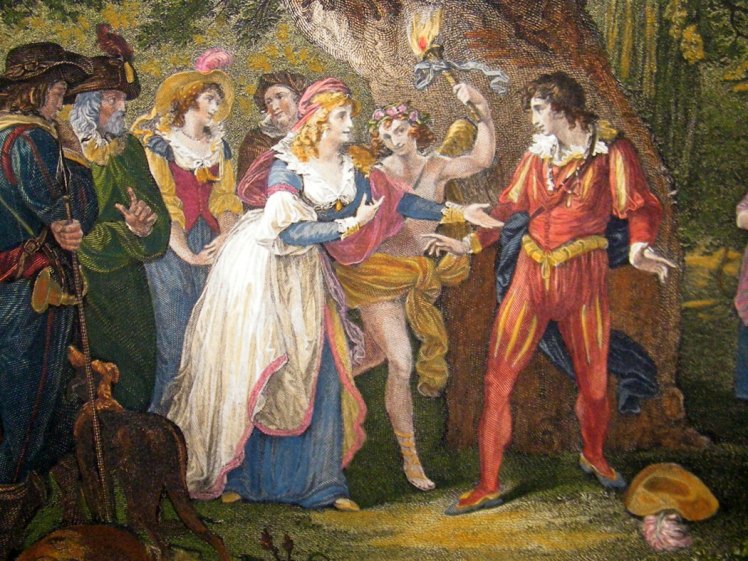 As You Like It offers a perfect chance for considering the idea that in Shakespeare’s times female characters were played by men. Women didn’t appear on stage until during the reign of Charles II, almost 50 years after Shakespeare’s death. It was a sort of unspoken agreement that audience would suspend disbelief in order to accept a boy to be Juliet or Lady Macbeth or indeed Rosalind. In As You Like It Shakespeare toys with this – this is his second play in which a girl disguises herself as a boy (this is like a reverse Victor/Victoria – “a man pretending to be a woman pretending to be man, it’s preposterous”), and in this disguise becomes attractive to her boyfriend (like Julia in Two Gentlemen of Verona), Rosalind also attracts the eye of another woman, Phoebe. Shakespeare layers on the queerness – Celia is devoted to Rosalind, Phoebe falls in love with Rosalind/Ganymede and Orlando is, despite himself, drawn to her as this “pretty youth”, willing to woo “him” in Rosalind’s place. Ganymede keeps repeating “And I will love no woman”, which statement attracts no attention from those believing him a man. In the end, when all the right couples have been wed, the actor playing Rosalind is left on the stage to speak an epilogue, as himself. It is the one play where a woman in the role removes one layer of this gender swap – but perhaps adds another of pretension.

It is brilliant. It is magnificent. It sings and sparkles, and like the best romantic comedies, gives you plenty to knowingly smile about, but no belly laughs.

There’s been some debate about where the Forest of Arden has got its name. Traditional suggestion is Ardennes, but there is an actual Forest of Arden in Warwickshire, Shakespeare’s county. The Ardens were a powerful Anglo-Saxon family in the area, and through his mother, Shakespeare was descended from them.

Today, the forest is a a golf course.

The expression “too much of a good thing” comes from this play. This is also a play full of witty dialogue, and the character of Touchstone has been given many clever but nonsensical speeches, like this one in Act 1 Scene 2:

And I have no idea what is going on in here:

But the big whopper is thrown in almost casually, spoken by the largely secondary character Jaques. “All the world’s a stage” is pretty much as famous a line as “To be or not to be” and the “seven ages of man” speech that follows is one of the most famous, oft-performed monologues by Shakespeare – the sort of number that is done to open any performance of assorted highlights.

All the world’s a stage,
And all the men and women merely players;
They have their exits and their entrances,
And one man in his time plays many parts,
His acts being seven ages. At first the infant,
Mewling and puking in the nurse’s arms.
Then, the whining school-boy with his satchel
And shining morning face, creeping like snail
Unwillingly to school. And then the lover,
Sighing like furnace, with a woeful ballad
Made to his mistress’ eyebrow. Then, a soldier,
Full of strange oaths, and bearded like the pard,
Jealous in honour, sudden, and quick in quarrel,
Seeking the bubble reputation
Even in the cannon’s mouth. And then, the justice,
In fair round belly, with a good capon lined,
With eyes severe, and beard of formal cut,
Full of wise saws, and modern instances,
And so he plays his part. The sixth age shifts
Into the lean and slippered pantaloon,
With spectacles on nose and pouch on side,
His youthful hose, well saved, a world too wide
For his shrunk shank, and his big manly voice,
Turning again toward childish treble, pipes
And whistles in his sound. Last scene of all,
That ends this strange eventful history,
Is second childishness and mere oblivion,
Sans teeth, sans eyes, sans taste, sans everything.

Rosalind. No one else comes even close. This is her play.

Another Shakespeare’s Globe production, from 2009. Naomi Frederick plays Rosalind and she’s perfect in both guises. Honorary mention to Dominic Rowan, whose Touchstone is a riot of physical comedy.