Some rise by sin, and some by virtue fall

Measure for Measure is another problem play – a dark comedy that leaves something of a bitter taste in one’s mouth. It’s a morality play, a study on human nature, and perhaps also a satire on the corrupting effect of power and the hypocrisies of the seemingly virtuous ruling classes.

Vincentio, the Duke of Vienna, has decided to leave the town under mysterious pretenses, and to hand over his powers to his deputy Angelo. While the Duke is wise and clever, Angelo is a bit of a priggish stick in the mud, immediately enforcing an ancient law that makes “fornication” punishable by death. His first victim is a young nobleman Claudio, who has got his girlfriend pregnant – rather than make the two marry (which they had already done, sort of), Angelo has him imprisoned and condemned. Claudio sends his mate Lucio to fetch his sister Isabella, who is a supremely virtuous novice in a convent, to plead on his behalf. Angelo is intent to stick to his principles, but is instantly so overcome by lust for Isabella that he agrees to let Claudio go on one condition: Isabella must have sex with him.

Nay, I’ll not warrant that; for I can speak
Against the thing I say. Answer to this:
I, now the voice of the recorded law,
Pronounce a sentence on your brother’s life:
Might there not be a charity in sin
To save this brother’s life? 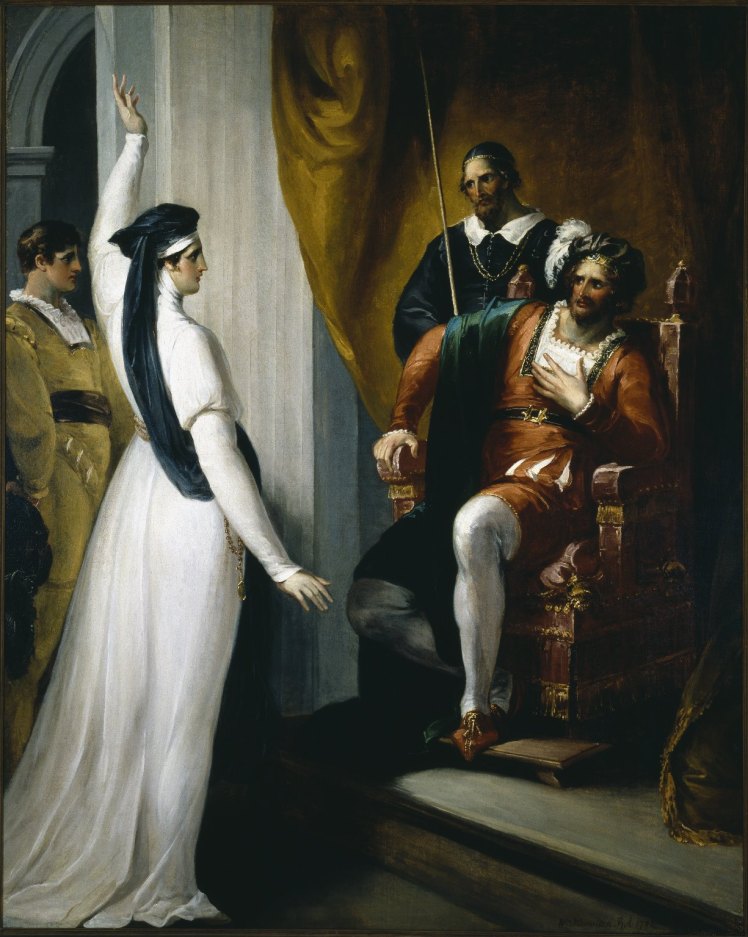 She of course refuses, being all virtuous and stuff, and not even Claudio’s begging (literally for his life) can make her relent.

Claudio:
Sweet sister, let me live:
What sin you do to save a brother’s life,
Nature dispenses with the deed so far
That it becomes a virtue.

Isabella:
O you beast!
O faithless coward! O dishonest wretch!
Wilt thou be made a man out of my vice?
Is’t not a kind of incest, to take life
From thine own sister’s shame? What should I think?
Heaven shield my mother play’d my father fair!
For such a warped slip of wilderness
Ne’er issued from his blood. Take my defiance!
Die, perish! Might but my bending down
Reprieve thee from thy fate, it should proceed:
I’ll pray a thousand prayers for thy death,
No word to save thee.

The Duke has stayed within ear and eyeshot of Vienna, and in disguise as a friar goes to the prison where Claudio is kept, and befriends him, Juliet and Isabella. He now comes up with a solution to Isabella’s problem, helping her to deceive Angelo. First, he devises a “bed trick”: Angelo has abandoned his girlfriend Mariana because she has lost her fortune (he’s greedy as well as nasty), and the Duke suggests that Isabella agrees to Angelo’s proposal, but let Mariana take her place and have sex with Angelo (in a dark room in complete silence) instead. Isabella, only worried about protecting her own virginity, agrees.

The Duke just knows that Angelo would go back on his word, and he does, demanding Claudio’s decapitated head to be brought to him; this makes the Duke to devise the “head trick” – Angelo is sent the head of another prisoner (death by natural causes) in place of Claudio’s, convincing him and everyone else that Claudio is dead.

After this silly charade, the Duke returns to Vienna, and Angelo’s hour of reckoning comes, with Isabella, Mariana and the Duke all contributing in his revelation as a hypocritical, mean wanker. The Duke sentences him to death, but makes him marry Mariana first so that she can inherit him and “buy herself a better husband”. She pleads for his life and the Duke, after revealing that Claudio is still alive, relents, commuting the sentence instead to forced marriage. He then proposes to Isabella, who doesn’t give him an answer on the page, leaving both the reader and the director to interpret the open silence for themselves.

It is an ambiguous ending – the only people who have a chance of a happy ending of sorts are Claudio and Juliet, who are at least for now in love with each other. After the argument between Claudio and Isabella in Act 3, they are never brought together again, and we don’t know how and if the conflict between them will be resolved. Angelo is forced into marriage with a woman he doesn’t want anymore, and who has been used by the Duke and Isabella for their gain. Lucio is made to marry a prostitute as a punishment for insulting the Duke (see – he can be just as merciless as Angelo). One must also ask what will become of Isabella and the Duke himself if they marry (I personally think they won’t) – there is warmth, understanding and humour in the Duke that Isabella cannot possess, and I can’t help but to think that the marriage would be a very unhappy one. The Duke may admire Isabella’s conviction and virtue, but how long before his needs – all too human needs – will drive a wedge between them, make him see her moral uprightness as mere self-righteousness?

The fanatically virginal Isabella is, I think, the character we are meant to sympathise with. She is put in a difficult position, to choose between her own virtue and her brother’s life, and for a modern-day reader her actions are condemning – not only is she willing to let her brother die to protect herself, but she is outraged that he’d even think that she should give in to Angelo. She also is quite happy to let Mariana take her place – her own virtue is not only more important than her brother’s life, but also than the virtue of another woman. Isabella is sexually closed off and out of sync with the rest of the characters – it is Pompey’s wisdom that the “lechery” of the Viennese is simply part of the human nature. Young people like Claudio and Juliet will succumb to their passions, because it is natural to them, and the stance Angelo takes – and his subsequent lust for Isabella – mere hypocrisy. Given the right temptation, he will fall just like everyone else.

Yes. It lacks the incoherent ambiguity of Troilus and Cressida, and has one of the most human, complex casts of characters of any Shakespeare play so far. It is very enjoyable, but perhaps works better on stage, where bits like the dialogue between Elbow and Pompey can come alive, than on page.

Mariana, the true victim of this malarkey, enjoyed a brief moment of popularity during the second half of the 19th century, following the publication of Tennyson’s poem Mariana in 1830. She was painted by many of the pre-Raphaelites, including John Everett Millais, William Holman Hunt and Dante Gabriel Rossetti.

My favourite passage is old Escalus’ exasperated muttering after Angelo first refuses to “makes scarecrow of the law” by showing clemency on Claudio:

Well, heaven forgive him! and forgive us all!
Some rise by sin, and some by virtue fall:
Some run from brakes of ice, and answer none:
And some condemned for a fault alone.

The Duke Vincentio has his moments. This play is another one where none of the characters come out looking particularly good – the Duke is selfish and perhaps even a bit cruel in the way how he manipulates the situation, he too probably lusts to soil Isabella’s pure white virtue, but he also doesn’t pretend to be more righteous than he is. There’s no point during the play that I don’t want to slap Isabella, the self-righteous, self-centered cow.

Another BBC Television Shakespeare. It has the same cheap, am dram look as the rest of the series, but is low on concept. The acting is however much better than in, say, last week’s Troilus and Cressida; Tim Bigott-Smith is a smooth Angelo, Kate Nelligan an Isabella that is all virtue and no sex.