Few weeks ago, I had surgery and I am only now trying to catch up on all the intended blog posts, including this one on the first Finnish bible in the Old Library of St John’s College, Oxford, kindly shown to me by their Assistant Librarian Ruth Ogden last month. I wondered about saving this for 6th December, the 100th anniversary of the Finnish independence, but probably better get it done before the memory of my visit has completely faded. 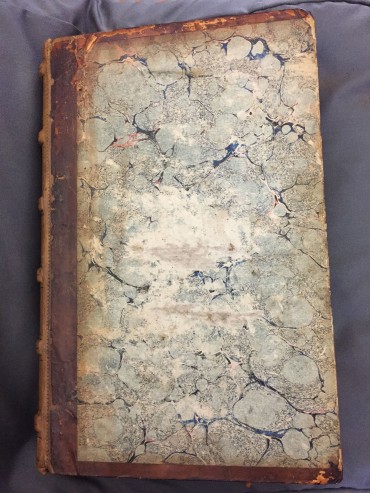 How it looks on the outside. 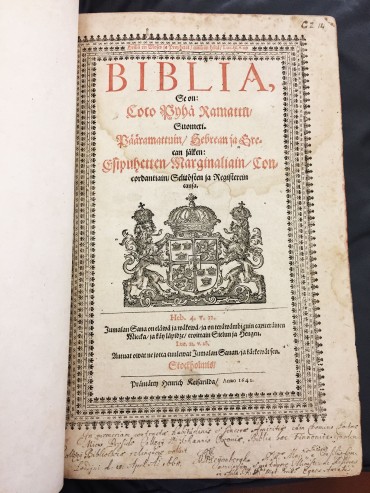 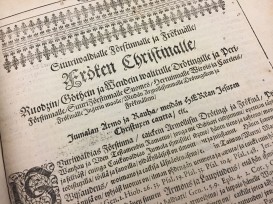 The bible is dedicated to Queen Christina. 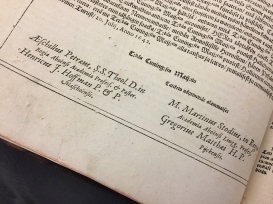 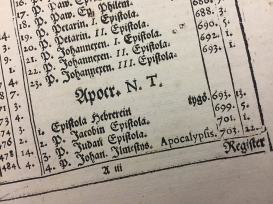 Unlike later editions, the first Bible contains both Old and New Testament apogrypha. 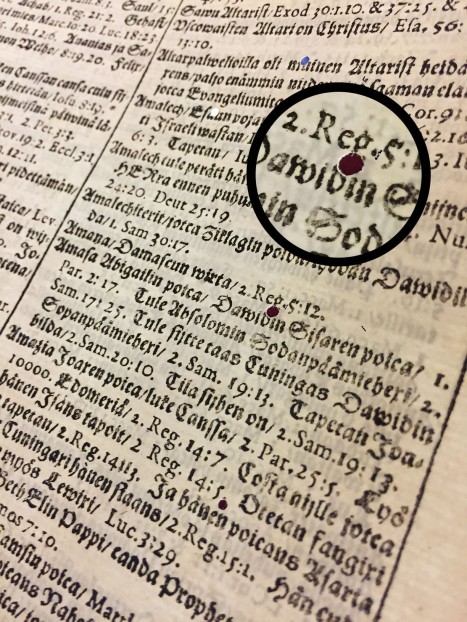 One of the peculiar delights of living in Oxford (and a stone’s throw from London) is that one has an access (of sorts) to lots of historical books and manuscripts. I have seen the Magna Carta and the original copy of the US Bill of Rights, Shakespeare’s First Folio and Jane Austen’s manuscripts, the Gutenberg Bible and a selection of the original papyrus fragments of the gospels, the manuscript of Handel’s Messiah – the list goes on. Few of them have actually felt as personal as this copy of the Biblia tho. Published in 1642, it is so rare that I have never had I seen one before now – there are only five copies that I know of in Finland, one of them privately owned and rarely on display. It is a book from which, along with the 1542 Abckiria and the 1548 Se Wsi Testamenti (New Testament), both by Michael Agricola, Finnish as a written language began. It stayed in use – with nothing more than few updates on the language, until 1930s when the next completely new official translation from original languages was made – for almost four hundred years. Browsing its pages I found myself contemplating the short history of Finnish culture (the library holding the book being older than the book itself), and also the printed, illustrated bible as an object d’art, as a cultural artifact.

Translating the whole bible in the situation this work was done must have been a huge undertaking; the text would have been full of words that Finnish as a language didn’t have, words that probably even the people doing the work – educated, sophisticated men, who had traveled and studied abroad – didn’t understand. Dragons? Crocodiles? Lions? What are those? Agricola hundred years earlier had already done some of the linguistic hard work, inventing words for the more abstract concepts, such as spirit and conscience, but the Old Testament would have been an uncharted territory, written and set in a world completely removed from the experience of a Swedish-Finnish theologian. A pair of Finnish grammars had been published after the Abckiria, but the grammar required for the translation would have probably been more sophisticated than that taught in those; decisions about how the language was to work had to be made, the committee responsible no doubt conscious of how their work would permanently affect written Finnish. Agricola’s New Testament translation had been considered to be too much in the south western dialect, and so the new translation was to be good, general language, understandable by all – sort of Finnish version of the Oxford English, only in a country where the educated, literate classes still spoke Swedish as their first language. Creating the text wasn’t the only hurdle to get the bible to the people either; there wasn’t a suitable printing press anywhere in Finland and so the work was done by Henrik Keyser in Stockholm. The print run was 1200 copies, 750 of which were sent to Finland; in the Reformist spirit of bringing the bible to the ordinary people, every church in the country was to have a copy. The book arrived as unbound pages in barrels, and were bound into folio upon purchase, the covers custom-made to each buyer.

It was probably in Stockholm that the Biblia also acquired its illustrations: 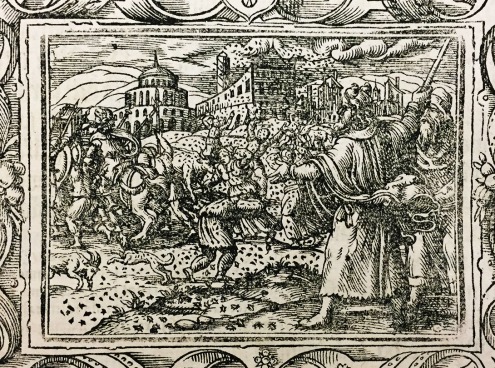 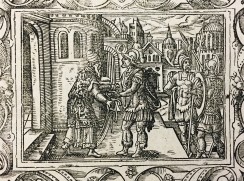 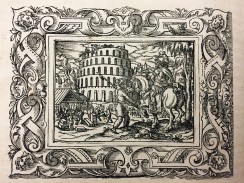 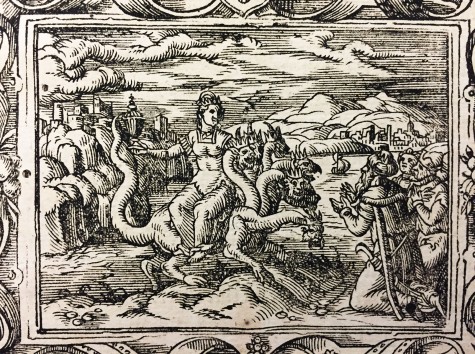 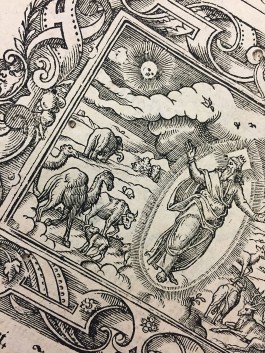 The images in these illustrations suggest to me that these originated from Italy; perhaps the printer had bought the plates ready-made and used them in another bible already (I’d be curious to find out if the same images are found anywhere else). There are anatomically very accurate foreign animals, like the elephant and elsewhere a fabulous little rhino, and buildings unlike any in Scandinavia. And how about this couple, caught in illicit acts in grand surroundings: 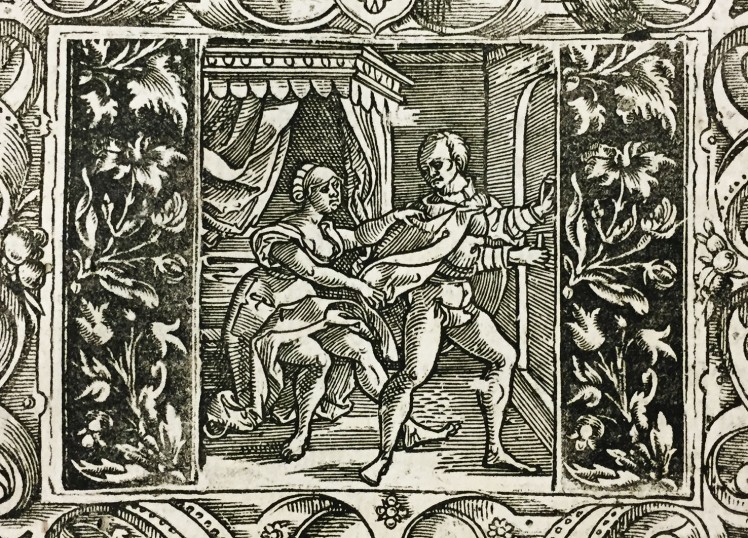 Sometimes what thoughts/feelings an object such as this bible will evoke is impossible to know beforehand. Leafing through the pages of the bible, looking at these exotic-looking illustrations, I found myself wondering about the impact the Biblia had on the people who first saw it 500 years ago. I rather suspect the world of the Star Wars is less alien as a concept to us today than the world of this book would have been to a Finnish smallholder who viewed the Biblia in the parish church; a man or a woman, who was likely illiterate and had never traveled far from their home. If the local priest was an educated man, he might have been to Stockholm, perhaps even Germany. Some – very few – may have traveled as far as Italy, but the average person lived and died where they were born, existing in a world where this bible was the first and only book they had seen, and news of the outside world were distant echoes. History was history of Sweden. What did they think of the images? They wouldn’t have had the knowledge of medieval/renaissance Europe, nor would they have known how the Levant looked like thousands of years earlier; did they see the images as realistic? How did they imagine the biblical world? How did seeing these images affect the way they saw their own world? 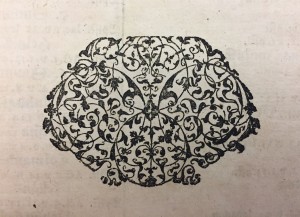 This copy of the Biblia was donated to St John’s College in 1668, probably by Johann Barckmann, the Baron Leijonbergh, who was a diplomatic envoy and friend of Samuel Pepys.In 349 years, I was the first person to ask to see it; like all of the rare books in their collections, it is available to view by appointment. All pictures are mine.

One thought on “One important book”