When the Almeida Theatre’s Hamlet, directed by Robert Icke, opened in February I didn’t really register it. By the summer I had a vague idea that it was a hit and had had great reviews, but that’s about it. One of my job perks is that there is, couple times a year, the odd free theatre ticket available, and so I got invited to go along to the Harold Pinter Theatre, where this production transferred for an extended run earlier in the summer. And I’m mighty glad that I went, for this is a great show – the production design and the acting are superb, and Icke’s reading of the play is interesting, although I suspect I liked it so much because it’s one that I mostly agree with.

Icke has chosen to play the setting straight – we are at the royal court of Denmark, and as an intro, TV footage of the late King Hamlet’s funeral is played. The texts on the screen are in Danish, and the funeral images are genuine archival footage (most likely from the funeral of the Queen Ingrid in 2000). The set is an impersonal modernist interior filled with office furniture, the sort of place where a public photo op might happen; the space is easily transferable into all the necessary locations – the den of the security, the cemetery, the fencing arena at the end. Glass screens give the stage depth and separate it into different spaces – we for example see a brief scene with Hamlet trying to persuade a naked, bathing Ophelia that he has seen his father’s ghost; it’s a small, silent but attractive snippet. The ghost of the king appears on the CCTV screens; he’s walking the palace corridors which the cameras are watching; there’s something genuinely creepy about this. There’s heavy security, there are spies, there are hidden microphones, and TV cameras on the faces of the royal family – Denmark here is indeed a prison, and Hamlet stifled by it.

He’s the indecisive, increasingly inarticulate young man who doesn’t fit in, and who doesn’t want to play along with Claudius’ publicity games, the very opposite of his stepfather/uncle’s pro-politician smoothness. He starts by winding people up, his madness a disruptive act that he puts on to unsettle those around him. Scott’s delivery is well-thought – he chooses to play the role naturally, breaking down the rhythms of the written language into naturally flowing (and pausing) speech, his body language emphasising that pattern. Gertrude (we just missed Juliet Stevenson in the role; seeing instead Derbhle Crotty on her second day) is absolutely infatuated by Claudius  – there’s no sense here that she has married him as a political/survival move; she absolutely is in lust with him – and he chases her around the room, finally falling asleep on top of her. Ophelia is portrayed as a sensitive posh girl, who can’t quite deal with the situation she’s in, Jessica Brown Findlay doing a perfectly believable, startling mad scene; I loved how modern the character feels like.

The first four acts are done in a way where pretty much nothing bothered me, or felt it doesn’t quite work, and that doesn’t happen too often. It is only in the final act that Icke has made some choices I’m not sure about. He seems to suggest (or the actress plays it) that Gertrude drinks the poisoned wine knowingly, to save her son; another Gertrude I recently saw thought this reading is stupid, and I agree – Gertrude knowing/thinking Claudius capable and willing to kill Hamlet surely opens the door to all kinds of questions about her culpability. Another puzzling choice is the ending – the already-dead are shown slow-dancing in heaven, and in the closing scene Laertes, Gertrude and Claudius all get up and join them, absolved by the ghost of King Hamlet. Only Hamlet himself is denied this absolution, Icke suggesting that he’s somehow more guilty than Claudius, something I don’t agree with. Hamlet is guilty all right – he sends Rosencrantz and Guildernstern to their deaths, and while he kills Polonius by accident, Ophelia’s madness and death is his fault even if he causes it unwittingly. He is unwilling, perhaps incapable, of seeing the consequences of all his actions, but there isn’t the kind of calculated malice there is in Claudius’ killing of his brother the king and stealing his life.

In the Act 3 scene with Ophelia Hamlet says “I am very proud, revengeful, ambitious”, and hearing that line got me thinking about Hamlet’s own relationship with the crown/power. He is the young man who grieves his father’s early death, set on revenge, but did he have expectations of his own? There’s another line in Act 5 –

He that hath killed my king and whored my mother,
Popped in between th’ election and my hopes,
Thrown out his angle for my proper life

that suggests that Hamlet did expect to become king one day; the system may even have been geared towards him inheriting his father. In the Denmark of Hamlet, the king is elected, and I think at the time of King Hamlet’s death, the prince was in Germany, leaving the door open for Claudius to usurp – he would have appealed to Hamlet’s absence, his young age, to his own marriage to Gertrude to persuade the nobility to elect him over the king’s son. Hamlet with his own actions, through the state of mind he’s in, takes himself out of the game of thrones pretty quickly,  but I think it would be interesting if more was made of Hamlet’s position as the heir who has been set aside in favour of Claudius, of what kind of king he would be (I suspect the answer is terrible/terrifying). 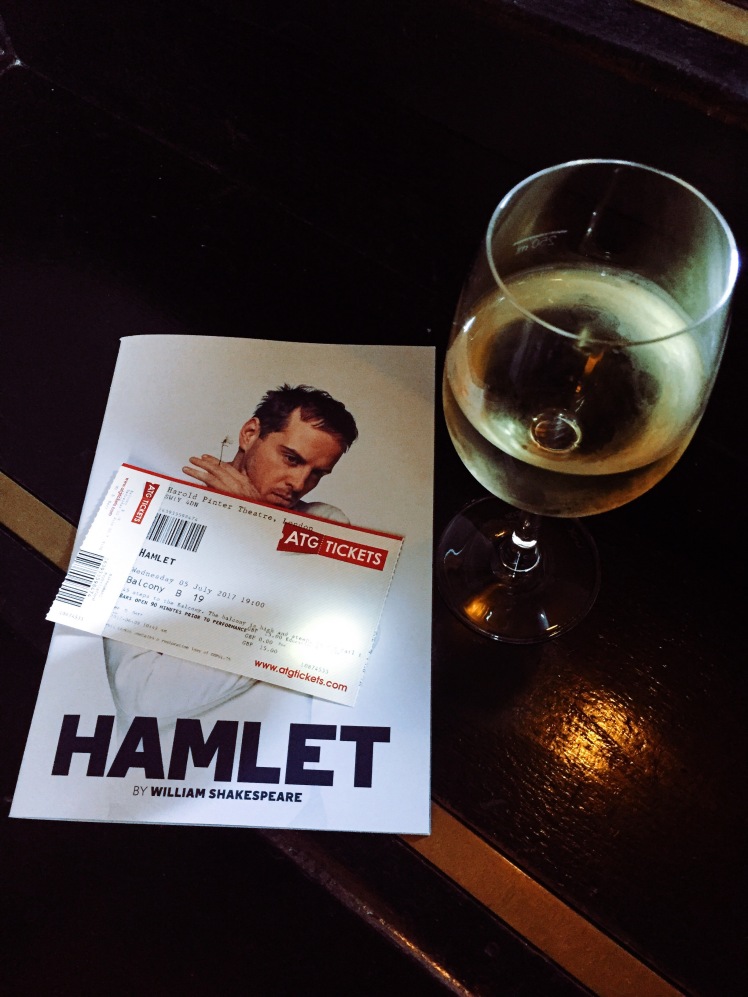 Hamlet will run in the Harold Pinter Theatre until September 3rd.