On Saturday I went to see the first of my November operas, Alban Berg’s Lulu at the Coliseum. Couple days before I had seen somewhere online a picture of the Frederic Leighton House, and a weekend’s entertainment was ready – the museum, a walk around the nearby Holland Park, a quick trek to Liberty and opera. Of course, the day then dawned grey and depressing, but for once I was determined to push on rather than just pull the duvet over my head and stay burrowed. And I’m glad I did. 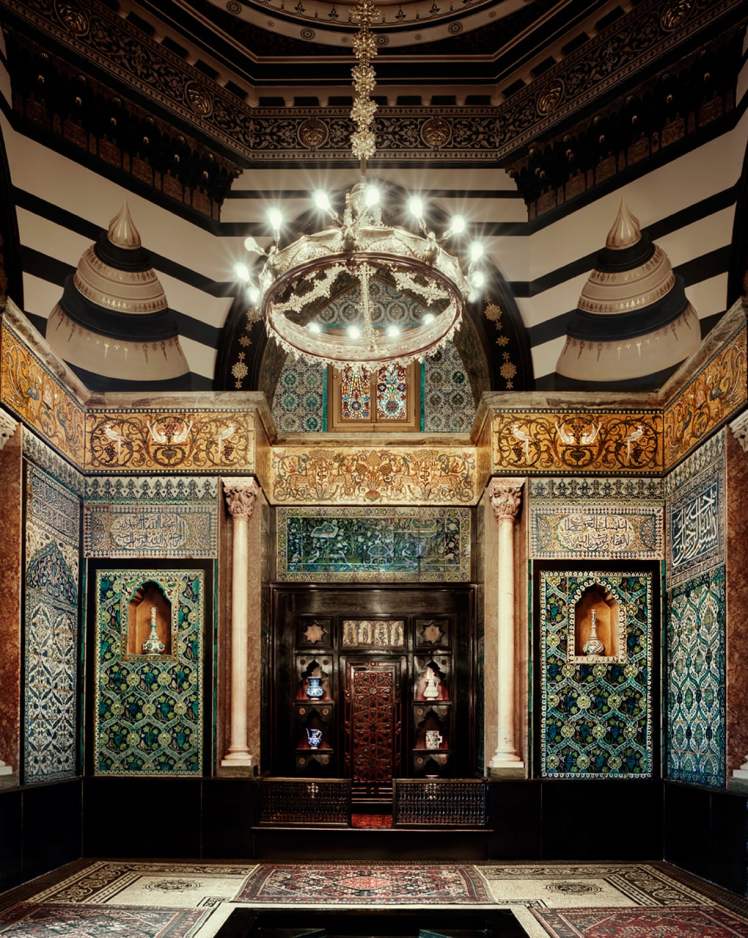 The Leighton House belongs today to the National Trust; Leighton himself died at 65 in 1896, on the day after he had been granted peerage, and the house with its contents was auctioned off. The museum opened in 1929, and it is a delightfully bonkers place, more a theatrical set than a museum in a true sense of the word; walking down the stairs one could pretend being a princess (or if you are me, Countess Olenska entering the parlour of the van der Luydens, unhurried), fill the space with imaginary guests in their high Victorian splendour sipping champagne from crystal coupes while the host himself is in the only bedroom in this vast house preparing to meet them. I suspect that only the paintings and the actual walls are original, and the whimsical bric-a-bracs and such are all part of the stage dressing. I peeked inside one of the many books casually piled around, and rather than Leighton’s bookplate, it had the distinct markings of a used books seller (£2!), and the letters scattered around, as well as many drawings, are copies. The Winter Studio has been converted into an exhibition space, and on display this winter is the most famous of Leighton’s paintings, Flaming June (bottom left).

Leighton produced six paintings for the 1895 Royal Academy exhibition; his poor health stopped him from attending any of the events surrounding the exhibition, and these paintings came to be his testament; he died few months after completing them. The text in the gallery tells the story – by the time of his death, Leighton as an artist had become unfashionable, and only one of these paintings was sold in the exhibition. The rest were passed through multiple hands, disappearing and reappearing many times over the 20th century, often in the most fantastical ways – all except one. The 121-year-old photo of the paintings on easels in Leighton’s studio (displayed for Queen Victoria herself) shows a head portrait of woman, and the exhibition guide knows to tell that it was once sold to the Norwegian royal family. After that, it simply disappeared and has never been seen again. That little mystery of the missing painting is such an intriguing one – where did it go?

I had seen pictures of Flaming June (who hasn’t?) before, and still I wasn’t quite prepared for it – it absolutely has that great painting energy, an eclipsing, eye-drawing power, a radiance. The colours are more brilliant than any reproduction can do justice to, more full of light, full of drowsy, post-coital bliss, flushed, vibrant life. She is naked, draped in a piece of golden orange cloth, the lines of the body barely concealed by it, her cheeks blushed. Yet there’s something pure about this woman, while the one in ‘Twix Hope and Fear – dark and demanding, the bare white arm between her and the viewer – is not innocent at all, looking back at the viewer almost accusingly; Leighton failed to sell it in his lifetime, so strangely unsettling, almost a bit repulsive it is. Leighton presented these paintings without any identification or explanation, leaving for the viewer to decide for themselves what they represent, and presented side by side, they seem even more mysterious – the warmly sexual woman, the dark woman, the crying woman, the oddly chaste woman, the woman turned away. 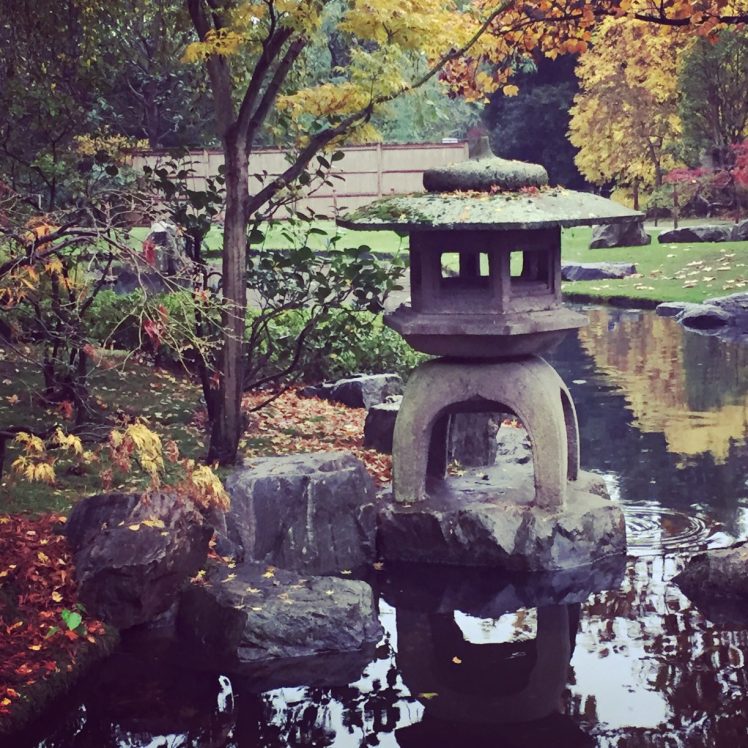 A walk in a park on a rainy, gloomy November day might not be for everyone, but I think there’s something sweetly melancholic about a place out of its season. There are but few people around, and the mind has space to breath. 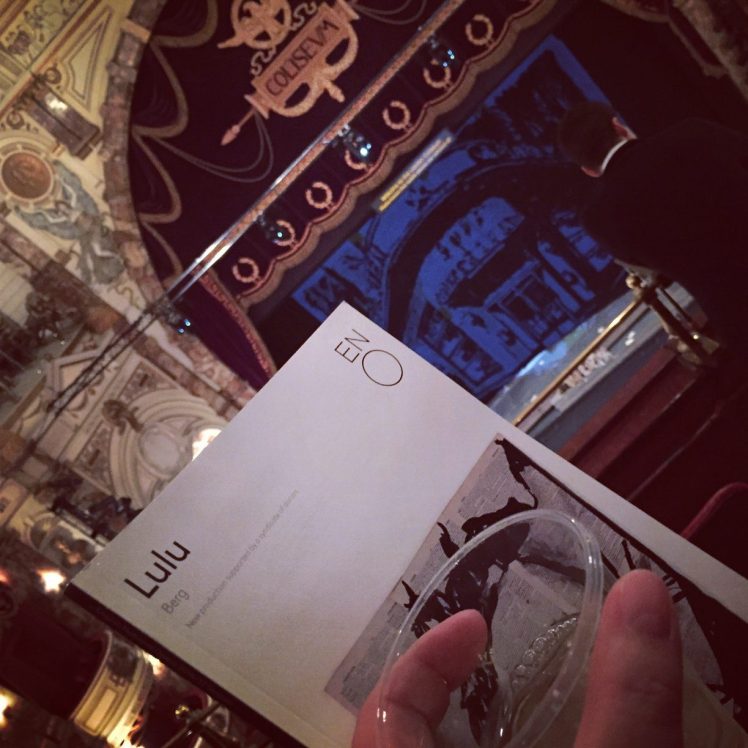 The main event of the day was of course the opera. I confess right away that I have something of a conflicted relationship with the ENO. I have enjoyed most of the things I have seen there, and the staff has been mostly helpful and polite, but the audiences have always felt unfriendly and snobbish in a way that I have never encountered for example at the Royal Opera House. The building with its labyrinthine hallways and staircases is difficult to navigate, and many seats have poor sound. But since my last visit, they have allowed drinks into the auditorium like a “proper” theatre, so that’s a point in the pros column!

I have seen Lulu once before, about 25 years ago in Finland (there was a fashion for obscurities – why stage Figaro, when one could just as well do Lulu or Menotti’s The Consul?), and I love it less than I feel I probably should. It is an opera that is, at best, just fine. The music of the first two acts is good, pleasant even. The ENO production uses the first completion, by Friedrich Cerha, and somehow it makes the third act less, rather than more, exciting. It is more melodic and less thrilling than the first two. The subject matter – a morally ambiguous woman stuck in a cycle of use and abuse – seems less outrageous and more banal today than it almost certainly did at the time of the composition. The story is originally set in the 1880s, and I wonder if it isn’t one that only fully reveals itself in that context – a context in which a bourgeois woman has no alternative but marriage, and yet in which Lulu’s many marriages would mark her an immoral, perhaps even insane, woman; in which the veiled reference of an incestual relationship with her vagrant father would be unspeakable, and in which a woman like the Countess would be considered grotesque for her very existence. I searched online for picture evidence, and it seems that in the past few years at least Lulu has been mostly staged as a modern, cartoonish fantasy, perhaps because of the darkly farcical humour with which Berg (who wrote the libretto himself) presents this story, as a human circus (or freak show) or sorts.

Regardless, I very much enjoyed William Kentridge’s production – it is pure early silent film era fantasy (the actual silent film narrating Lulu’s fate following her killing of Dr Schon is a particular highlight), the narrative accented at every point by a kaleidoscope of Rorschach style ink patterns, coarse thick brush paintings on pages of an Oxford English Dictionary (I think) obscuring the stage, creating a visually peculiarly two-dimensional world. Kentridge has dressed Lulu in black and white; she is part of this mad backdrop, this fantasy world, while the various men pursuing her stand out of it in their garish, bright colours. They may not change their clothes, but as the time within the drama passes, the way how they see this woman seems to change – in the beginning they just want her, in the end they despise themselves for still wanting her. Lulu herself would be more sympathetic if it wasn’t for the revelation that she murdered Dr Schon’s first wife – she may have nothing but contempt for the men who want her, but she cannot tolerate competition, divided loyalties, either. Another lingering thought I had that she is a woman everyone wants to have sex with, but probably no one actually does – until she’s turning tricks on London’s streets.

The singing overall is excellent without being wildly exciting; Brenda Rae is completely believable in the title role, her acting brilliant, but occasionally her voice disappears in the (slightly worn) gilded barn that is the Coliseum. There’s Willard White on the stage, believe it or not, and Sarah Connolly is a great Countess Geschwitz, her portrayal of a woman rejected and ridiculed by those around her as carefully studied as it’s brilliant.

Flaming June is on display in The Frederic Leighton House till April 2017; if you go and see it, take walk around the Holland Park, especially if the weather is cold. Alban Berg’s Lulu has two performances left this week; there are still some tickets left.