I had rather hear my dog bark at a crow, than a man swear he loves me.

Confession: for the first time ever, I forgot that I’m supposed to be doing a post today. Hence today’s post has been put together with the Oxford Shakespeare, the Amazon rental of the Joss Whedon adaptation and my laptop all side by side on the desk, trying to make some sense of this play as a go. Can’t wait for the holidays to be over and the normal rhythms and flows to begin.

Here we are, at the halfway point. Eighteen plays down, eighteen to go. Chronologically, this is the middle period of his career; the first of plays was written about ten years before Much Ado, and he would keep on writing for another fifteen or so, the quality of his creative output declining during the last few years. In the next five to six years, he will write five of his greatest masterpieces, including Hamlet and King Lear. This is a play that is often these days performed as “Love’s Labour Won” piece, a companion to the earlier Love’s Labour Lost, with which it shares some superficial similarities. So far in his career Shakespeare has written mostly histories and comedies, and his progress as an author can be tracked through these comedies – while Much Ado shares many similarities with the previous romcoms in his output, it feels superior. The language is better, the comedy is more subtle, the love between the two main characters truer to life. There’s less silliness, although in his comedies Shakespeare never quite gives up the repeating the same tropes of mistaken identities and disguises.

Much Ado About Nothing tells about two pairs of lovers. First, there’s Beatrice and Benedick, who at one point in the past were lovers, and whose relationship turned sour. We never learn the extent of this past relationship, but each blames the other for not just the end of this relationship, but for the fact that it put them both off love thoroughly. Second, there’s Benedick’s mate Claudio, who is in love with Beatrice’s cousin Hero. Claudio proceeds to woo Hero with the usual methods of masked balls, mistaken/concealed identities and practical jokes (I’m starting to think that in all of Shakespeare, Romeo might be the only one who actually just goes to the girl he likes and talks to her), all of which lead to horrible misunderstandings and much misery, before all is sorted out for the best in the end. 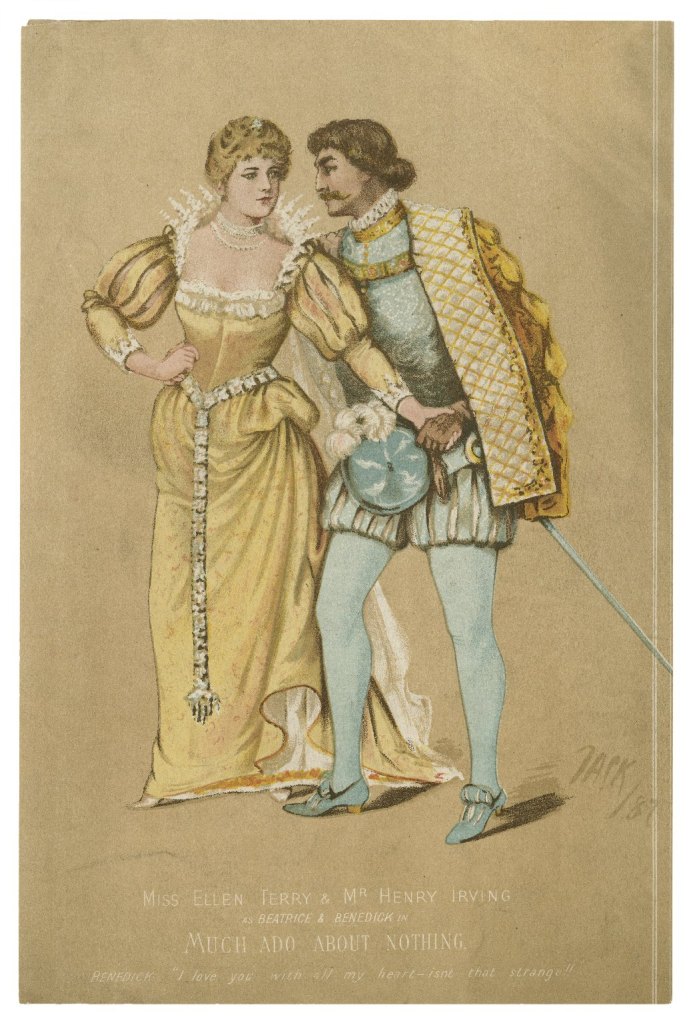 The plot of this play would really require a flowchart or a mindmap or some other visual aid like that to be described effectively. As usual, there has been a war of some sort somewhere, and Prince of Aragon, Don Pedro, has been victorious over his illegitimate half-brother Don John. Pedro returns to Messina, to meet with the governor Leonato and his daughter Hero, as well as his orphaned niece Beatrice. With Pedro are his mate Benedick and Claudio. Don John has also made his way, together with his various hangers-on. As Leonato and the girls talk about all these men arriving, it is noted that

There is a
kind of merry war betwixt Signior Benedick and her:
they never meet but there’s a skirmish of wit
between them.

Claudio is also in love Hero, and continuously, gently mocked by Benedick for it. Don Pedro takes up the role of a sort of universal wingman – he woos Hero for Claudio, and devices a plot to bring Beatrice and Benedick together by convincing each of them that the other is in love with them. 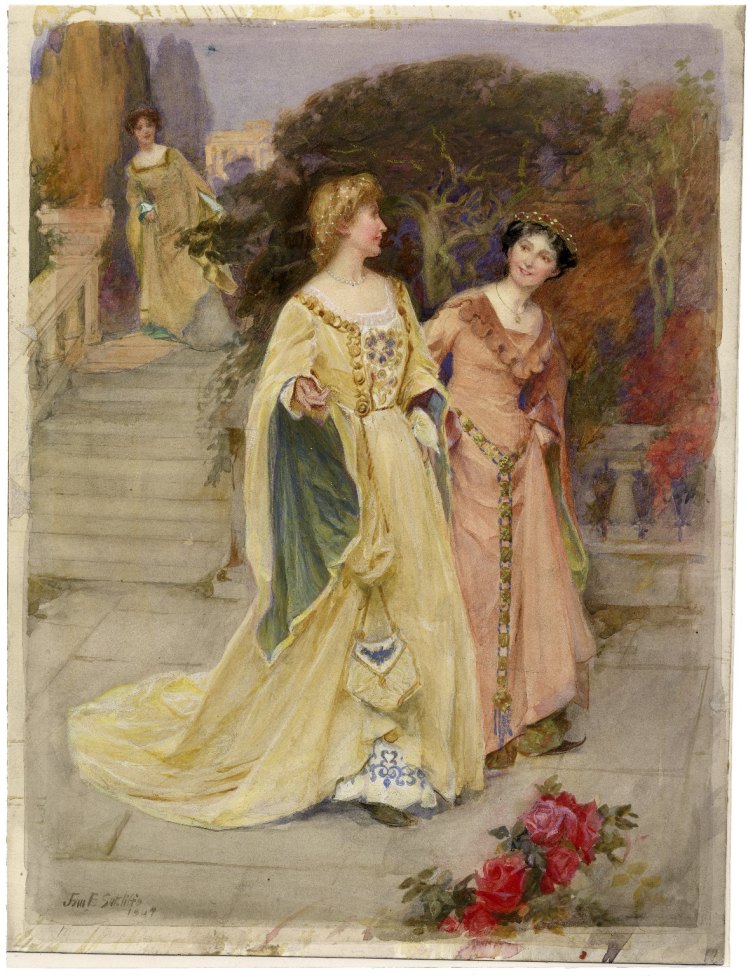 Don John is sulking after his defeat, and decides to extract his revenge by making using Claudio’s feelings for Hero. He persuades his mate Boracchio to woo Hero’s attendant Margaret, who will disguise herself as Hero, with the intent of making everyone think that Hero has been unfaithful to Claudio.

Amazingly, this harebrained scheme works, and things escalate in a spectacular manner. Don John tells everyone that Hero has been unfaithful to Claudio. Claudio doesn’t believe it until he sees Boracchio and Margaret and is convinced that she’s Hero. In their hastily arranged wedding, Claudio accuses Hero, who faints, and by doing so, convinces even her father of her guilt.

Sweet prince, you learn me noble thankfulness.
There, Leonato, take her back again:
Give not this rotten orange to your friend;
She’s but the sign and semblance of her honour.
Behold how like a maid she blushes here!
O, what authority and show of truth
Can cunning sin cover itself withal!
Comes not that blood as modest evidence
To witness simple virtue? Would you not swear,
All you that see her, that she were a maid,
By these exterior shows? But she is none:
She knows the heat of a luxurious bed;
Her blush is guiltiness, not modesty.

The priest persuades Hero that she better lie low until the dust has settled and her innocence can be proved; she does just that by faking her own death. Beatrice and Benedick rise to the occasion by being the mature adults (well, for a moment at least) in the middle of all this drama; Benedick tells Beatrice that he doesn’t believe that Hero is guilty, and the two confess their love for each other, and Beatrice then sends Benedick to kill Claudio to avenge the wronged Hero. Boracchio and Conrade (Don John’s other henchman) get themselves arrested by a pair of watchmen, and thanks to this, the truth about Hero having been framed begins to unravel. Claudio and Don Pedro are confronted by Leonato and then Benedick. The watchmen bring in Boracchio and Conrade, who reveal the whole plot to the devastated Claudio and Don Pedro; Leonato demands of Claudio that he tell everyone that Hero died innocent and wronged, and that to settle scores he marry Antonio’s daughter. Claudio agrees. At the wedding “Antonio’s daughter” reveals herself as Hero – Claudio pleads to her, and the two reconcile. Beatrice and Benedick discover the ruse, but they are in love with each other and it little matters. The play closes with a messenger bringing news that Don John who tried to escape has been recaptured; Leonato dismisses the news by saying that tomorrow he’ll come up with a fitting punishment.

The title refers to this complicated courtship between Claudio and Hero – the poor girl doesn’t actually do anything to wrong him, but Claudio nonetheless believes that she has done everything, and all of this brouhaha follows. As it often happens, it is the instigator, Don John, who gets all the blame for what has happened, with Claudio getting off pretty lightly for being the jealous ass that he is. There is a streak of “bros before hos” in this play, like there is in many of Shakespeare’s comedies; “nothing” was an Elizabethan slang word for woman’s, erm, bits, which gives the title a double meaning. Not only is it a play about huge, complicated events stemming from nothing much, but it’s a play about the tizz into which otherwise sensible men get themselves into at the prospect of… nothing *wink wink*.

Beatrice and Benedick (no doubt Shakespeare misspelled the name on purpose) are the prototype of the romcom trope of “hate you hate you hat… love you” lovers. They fight a lot. They try constantly to outwit one another, yet they seem to mature and grow as characters through their dealings with one another. Claudio is much more stale, while Hero is essentially just a plot device – much is made of her “rebirth” in the end, how the old Hero died and she’s now a new one, but I rather feel that had she really been born anew through this mess, she would have told Claudio where to go rather than agreed to marry him.

Yes. From this point on, Shakespeare won’t write a bad play again, not until at the very end of his career. Much Ado is witty and eloquent and somehow the ridiculous plot stays together throughout the play.

Funnily enough, I can’t think of anything. But here’s a fun assumption: I’m pretty sure that the old-salt-thirsting-you lovers in Philadelphia Story are based on Beatrice and Benedick.

This is a very eloquent, smooth play, and the dialogue written for Beatrice and Benedick sparkles. My favourite bit is in Act 1, scene i – the two of them meet at the masque, and Beatrice either doesn’t recognise Benedick or pretends not to:

Beatrice:
That I was disdainful, and that I had my good wit
out of the ‘Hundred Merry Tales:’–well this was
Signior Benedick that said so.

Beatrice:
I am sure you know him well enough.

Benedick:
Not I, believe me.

Beatrice:
Did he never make you laugh?

Benedick:
I pray you, what is he?

Beatrice:
Why, he is the prince’s jester: a very dull fool;
only his gift is in devising impossible slanders:
none but libertines delight in him; and the
commendation is not in his wit, but in his villany;
for he both pleases men and angers them, and then
they laugh at him and beat him. I am sure he is in
the fleet: I would he had boarded me.

Benedick:
When I know the gentleman, I’ll tell him what you say.

Beatrice:
Do, do: he’ll but break a comparison or two on me;
which, peradventure not marked or not laughed at,
strikes him into melancholy; and then there’s a
partridge wing saved, for the fool will eat no
supper that night.

My favourite passage is from Act 4, scene i tho. Beatrice is pleading to Benedick to avenge Hero, and is frustrated by how the same man who are all keen to “be men” for each other will only honour women with words and not deeds:

O that I were a man for his sake! or that I
had any friend would be a man for my sake! But
manhood is melted into courtesies, valour into
compliment, and men are only turned into tongue, and
trim ones too: he is now as valiant as Hercules
that only tells a lie and swears it. I cannot be a
man with wishing, therefore I will die a woman with grieving.

I like Beatrice best of all the women in Shakespeare’s plays so far. She reminds me of Lorelei Gilmore (“I wish my horse had the speed of your tongue.” ) with all her wit, hiding her vulnerability and softness behind fast talking in her romantic encounters.

Josh Whedon’s adaptation from 2012. It relocates the action to modern day California, making Leonato, Don Pedro and Don John members of organised crime gangs and setting all the action in Leonato’s house and grounds (Whedon used his own house). It’s filmed elegantly in black and white, with Amy Acker as rather glorious Beatrice.