You may my glories and my state depose,
But not my griefs; still am I king of those.

The contention was about the end of the War of the Roses and the Yorks; the second history tetralogy goes further back in time, exploring the history of the Lancaster branch of the House of Plantagenet. Richard II was crowned king in 1377 when he was only ten years old; according to the legend, three kings – the King of Castille, the King of Navarre and the King of Portugal – were present at his birth. He was the younger son of the Black Prince Edward; he survived both his older brother and his father, and inherited the throne from his grandfather Edward III. Richard’s reign was marred with crisis, and was ultimately overthrown by Henry Bolingbroke (who became Henry IV). He spent the last few months of his life imprisoned in the Pontefract Castle, where he presumably died of starvation in 1400.

In the beginning of the play, the Duke of Gloucester has been murdered, and two noblemen, Henry Bolingbroke and Thomas Mowbray, come before the King, each accusing the other of the murder. They plead to the King to have their quarrel out on the battlefield, and the King agrees – only, on the day of the battle, he changes his mind and calls it off, instead banishing both from England, Mowbray permanently and Bolingbroke first for ten and then, softened by Bolingbroke’s father’s grief, for six years. Shakespeare then shows the volatile, narcissistic nature of Richard – the King mocks Bolingbroke with his courtiers, and plans new taxes to fund a war in Ireland against rebellion. News come that old John of Gaunt is dying, and the King decides to seize his fortune to fund the same war.

This precious stone set in the silver sea,
Which serves it in the office of a wall,
Or as a moat defensive to a house,
Against the envy of less happier lands,
This blessed plot, this earth, this realm, this England

John Gaunt laments the direction the country is going to under Richard’s rule; he sees the King as young and petulant and tells him as much – “Landlord of England art thou now, not king.” Gaunt dies off stage, and the King tells that he plans to use Gaunt’s property to fund the Irish war. York tries to talk him out of it, explaining it will make him more unpopular. The King refuses to take heed.

Bolingbroke has raised an army in France and returned to England, and news arrive that already he has gained strong support. Richard is in Ireland, and his uncle York is his regent, put in a desperate place.

God for his mercy! what a tide of woes
Comes rushing on this woeful land at once!
I know not what to do.

Bolingbroke has come to lay his claim to his inheritance; York is conflicted – he knows his nephew is right, but has remaining loyalty to the King. Elsewhere, it’s rumoured that the King is already dead. Unlike in the Henry VI there’s no fluctuation of power here – Bolingbroke returns, drives the King out and that’s that really. By the start of Act 3, Bolingbroke has smoked out Richard’s courtiers and condemns to them to death; by the time Richard arrives back in England, Bolingbroke is well on his way and the King pretty much just gives up. The historical Richard II had mental health/personality issues, and Shakespeare shows as much – the Kings rants, talks nonsense, and occasionally great truths.

Revolt our subjects? that we cannot mend;
They break their faith to God as well as us:
Cry woe, destruction, ruin and decay:
The worst is death, and death will have his day.

Bolingbroke meets the King and tells him that he has come to claim his inheritance, rather than to seek the English throne, but his true designs are revealed by a pair of gardeners, gossiping within an earshot of the (rather melancholy) Queen – of course he is planning to seize the crown.

Act 4 consists of a single, long scene. Bolingbroke has arrived in the Westminster, set on finding out the truth about Gloucester’s murder. The deposed King has no alternative but the give up his throne – his supporters are dead, and Bolingbroke has in a short period become very popular. Richard however makes a big, histrionic scene involving him dramatically handing his crown and sceptre to Bolingbroke and calling him Judas, and while Bolingbroke intends to get on with the ruling of the country, the deposed Richard makes long-winded theatrical speeches about his own betrayed humbleness. Bolingbroke sends him to the Tower. 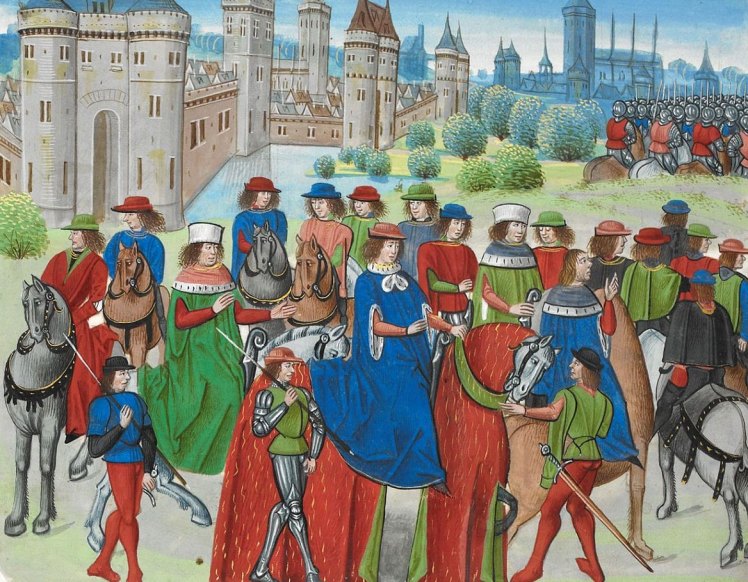 Before Henry Bolingbroke has even been crowned king, Aumerle (who also may or may not have killed Gloucester), Bishop of Carlisle and the Abbot of Westminster have conspired to depose him and reinstate Richard as the monarch. York discovers that Aumerle (his son) is traitorous and chooses to be loyal to Bolingbroke. As York and his wife meet Bolingbroke, each of them appeals to him – York that his son be punished, the Duchess of York that he be pardoned. The Duchess’ pleads are more effective, and Aumerle is indeed pardoned.

Have I no friend will rid me of this living fear?

While Bolingbroke speaks, one Exton gets an idea that Bolingbroke is appealing to him to dispose of the deposed King Richard II. In Pomfret (Pontefract) Castle, Richard is doing some further soul-searching; Exton enters and murders him. When he hears about this deed, Bolingbroke (who quite possibly did not mean Richard to be killed) banishes Exton and promises that to atone the King’s death, he will himself travel to the Holy Land…

Reading Richard II just now, after the UK has voted to leave the EU and the government is falling apart, its text seems very current. Never since the wars was there a more appropriate time to step back and read John of Gaunt’s speech about England, both elegiac and grieving what has become of it:

That England, that was wont to conquer others,
Hath made a shameful conquest of itself.

Bolingbroke plays the long game – a subtle but ruthless campaign to get what he wants; he manipulates the people and the King, but Shakespeare presents him as the preferable alternative to the volatile, petulant Richard II. The scene of Bolingbroke meeting the King in the Flint Castle, and Richard surrendering without as much as an argument, and his later behaviour – the dramatic way how he hands over the crown and the sceptre to Bolingbroke, his theatrical ranting about betrayal and the terrible sort of histrionic self pity – has baffled scholars. Why doesn’t the King defend himself, rally an army? His coffers may be empty, but surely Aumerle and Carlisle are not his only supporters? The King appears weak, vain and mentally unstable, a contrast to the strong, straightforward Bolingbroke. Notable difference to pretty much all plays so far is also the weakness of the women characters. There are only two – the Queen and the Duchess of York. One is a mother, the other a child bride, though Shakespeare’s Isabella de Valois is a young adult rather than a ten-year-old. The Duchess is a lioness, willing to go against her husband to save her son. The Queen appears to have no relationship with her husband at all.

It’s brilliant. The top 10 of the best Shakespeare plays is pretty crowded, but I have frequently seen Richard II in the top 15. It is quotable, textually brilliant play, and it is rather difficult to understand what it really is about. It is a straightforward, uncluttered story – there are no secondary characters serving secondary plots, none of the toing and froing of the contention.

Richard II was born in France, but his father, “the Black Prince” Edward was born in Woodstock Palace outside Oxford. No one knows for certain why he was called the Black Prince, though his coat of arms had three white feathers on a black background.

The Woodstock Palace was destroyed during the English Civil War, and the remaining stones later used in the construction of Blenheim Palace.

There are many truly wonderful lines in the play, but since I have already used John of Gaunt’s speech about England, I will go with a passage from the imprisoned Richard II’s speech in Act 5 as my favourite:

I wasted time, and now doth time waste me;
For now hath time made me his numbering clock:
My thoughts are minutes; and with sighs they jar
Their watches on unto mine eyes, the outward watch,
Whereto my finger, like a dial’s point,
Is pointing still, in cleansing them from tears.
Now sir, the sound that tells what hour it is
Are clamorous groans, which strike upon my heart,
Which is the bell: so sighs and tears and groans
Show minutes, times, and hours.”

The principal cast is actually very small, and all the characters are well written. To name a favourite though, John of Gaunt wins for his fantastic speech about England.

None. The library copy of The Hollow Crown adaptation of the play refused to work in all my devices, thus denying me the chance to see Ben Whinshaw reenacting the iconic gold portrait (see above) of the king.