When will this fearful slumber have an end?

Titus Andronicus is, literally and figuratively, a horror show. By its content, it is a fairly typical Elizabethan/Jacobean revenge tragedy, full of murder, madness, cannibalism, rape, blood, severed heads, severed… you get the idea. If 1 Henry VI was for a long time considered not to have been written by Shakespeare because it wasn’t very good, Titus has been denied full Shakespearean authorship because of its “distasteful” subject matter – yet, at the time its writing, it was a huge hit, a blockbuster. Think Star Wars. Think Titanic. The Elizabethan audiences were accustomed to public executions, beheadings, animal fights and such, and so the violence of the play was perfectly passable entertainment in their eyes, but the later audiences (and scholarship) all the way to the 20th century hated it. Harold Bloom, in his often delightfully stroppy 1998 book, called it an atrocity and a howler, a play with little or no artistic merit. The Victorians considered it fantastical – the play’s particular brand of violence was too unbelievable for them. Undeniably there’s an element of gratuity here – one cannot ever be quite sure whether to be revolted or (uncomfortably) laugh, when the heads start falling and the limbs get hacked off. It is a tragedy, but one cannot ever really be touched or horrified by it in the same way as one is by Lear or Hamlet or Othello.

Titus Andronicus, unlike like the other Roman plays by Shakespeare, is not set in any specified time during the Roman history, nor are its characters historical. It opens with an argument between the two sons of an unnamed, recently deceased emperor – which one of them should follow their father to the throne? This argument is interrupted by Marcus Andronicus, who tells them that the people of Rome have chosen his brother, the general Titus, recently victorious in a war against the Goths, as the new emperor. Titus arrives in a triumph, with his sons, and brings with him some spoils of war – Tamora the Queen of Goths, her three sons, and her secret lover, the Moor Aaron. Titus hands Tamora’s eldest son to his soldiers to be sacrificed to gods; Tamora pleads for his life in vain. Titus is informed by Marcus that he has been elected the new emperor, but appealing to his old age, he declines and instead makes Saturninus the emperor, mostly because he pleads the loudest. These are the two early bad decisions that set forth the whole chain of events; had Titus spared Tamora’s son and made the gentle, level-headed Bassianus the emperor over the idiotic, caustic Saturninus, the whole mess that follows probably wouldn’t have happened.

Saturninus announces his desire to marry Lavinia (and – effectively – to make Tamora his mistress); Bassianus announces that she belongs to him, and things escalate pretty quickly from here – Titus’ sons defend their sister’s promise to Bassianus, Titus kills Mutius and disowns Lucius and Marcus, and and takes his first steps into insanity. Saturninus isn’t bothered by the loss of Lavinia and marries Tamora instead; this doesn’t stop him from accusing his brother and Titus of treason though. Tamora, the duplicitous biatch, pleads mercy for Titus, but privately swears to revenge the death of her son on them all.

Enter Aaron, Tamora’s servant and lover, and Chiron and Demetrius, her two remaining sons. Chiron has got a bit of a burning for Lavinia, and Aaron talks the brothers into killing Bassianus and “reveling in Lavinia’s treasury”. After a day’s hunting, and egged on by Tamora, Chiron and Demetrius kill Bassianus. They drag Lavinia away, Tamora telling them to kill her once they have satisfied their lust. Titus’ sons find Bassianus’ body, and are implicated on his murder. Chiron and Demetrius drag Lavinia back; she has been brutally raped, and her hands and tongue cut off. She is discovered by her uncle Marcus, who is shocked. Titus is slipping further into madness, and is devastated by Lavinia’s fate. Aaron enters to stir up some more shit – he tells them that Titus’ sons will be spared if one of the Andronici cut off their hand and send it to Saturninus. Rather than saying “this is messed up”, and overtaking Aaron, they actually debate who’s hand to cut. Titus’ hand is sent to the emperor, who returns it with the severed heads of his sons. Titus swears revenge.

You heavy people, circle me about,
That I may turn me to each one of you,
And swear unto my soul to right your wrongs.

Elsewhere, Tamora gives birth to Aaron’s son. Aware that if the affair is revealed, they will all be doomed, Aaron hides his child and kills the nurse. He is later captured by the Goths and Lucius, and confesses everything to save his son’s life – Titus’ foolish decisions may have set the events in motion, but from there on, Aaron’s hand has guided them. Tamora, unaware that Aaron has been captured, disguises herself as Revenge, trying to find out if Titus really is insane; he sees straight through her, but plays along, persuading her to leave her sons (Rapine and Murder) behind. They are captured and killed, and Titus plans to bake their bodies into a pie. Tamora and Saturninus come and feast on the pie; while they are eating, Titus asks Saturninus if a man should kill his daughter who has been raped. He says yes, and Titus kills Lavinia in front of them, then revealing that he has killed Tamora’s sons and that she has eaten them. He kills her; Saturninus kills him, and Lucius kills Saturninus. He and Marcus reveal to the people of Rome what really happened, and Lucius is made emperor; his punishment for Aaron is to bury him in sand with his head exposed, leaving him to starve to death – he refuses to repent, except any good deeds he might have done. There’s justice in the end – Marcus and Lucius, the two men mostly not guilty of anything, are left standing in the end, and it is left to them to rebuilt what the preceding events have torn down.

In an odd sort of way, Titus has echoes of later, greater works – Aaron with his evil, manipulative ways is like Iago from Othello (although with less defined motives), and Titus himself in more ways than one like King Lear. But there’s something oddly shallow about the play; the horror seems just that tiny bit too horrible – in Lavinia’s story for example, the most horrible moment is not her rape and mutilation, or even her death, but the fact that her father makes her carry his severed hand between her teeth (in some versions of the play, her arms). The horrors are cut by uneasy laughter and the text allows even an amount of slapstick comedy – it was this element of rough humour that suggested to previous generations that Shakespeare didn’t write this play seriously, that it was somehow meant as an over-the-top parody of the revenge dramas popular at the time. Yet, as a play it is too well planned, too well contained, to really have been written casually or in jest; whatever Shakespeare’s motivations in writing this party of blood were, they were probably serious.

Yes and no. Titus Andronicus has a very good, dynamic structure – the story flows with ease, and the internal logic never fails to make sense. The characters are mostly two-dimensional – like in the classical plays it draws from, more moral types than real people. The text is not bad, but somehow also doesn’t quite stir one’s soul. But, like any old Hollywood blockbuster, it is entertaining when staged well, even if it leaves you wanting a shower in the end.

The story of a woman whose tongue is cut off to keep her from revealing who raped her is lifted from Ovid’s telling of Philomela; after her attack, Philomela weaves a tapestry in which she hides the identity of her attacker, Tereus (her brother-in-law). To revenge the attack on her sister, Procne, kills her son and feeds the body, boiled, to her husband. Tereus chases her with an axe, but the gods turn Procne and Philomela into sparrow and nightingale respectively. And there’s the cruel catch: female nightingale is silent.

Philomela and Procne by Bouguereau.

This is another play in which the speeches are mostly forgettable. There are however lots of good one-liners and also this classic exchange between Aaron and Tamora’s sons, upon the two discovering that Aaron is the father of her newborn:

Demetrius: Villain, what hast thou done?
Aaron: That which thou canst not undo.
Chiron: Thou hast undone our mother.
Aaron: Villain, I have done thy mother.

Oh how we laughed.

It’s almost impossible to pick one. Not because there are so many, but because there are almost none. But I will go with Lucius, the unexpected emperor, and not an entirely bad man, and with his sister Lavinia, the innocent victim of them all.

Globe on Screen version from 2015 – the famous one. This production was too gory for some viewers – some people got so queasy by the sight of the blood-vomiting, maimed Lavinia that they fainted. I found the murder of the Nurse much worse though – in keeping with Aaron’s words “pig prepared to the spit”, he stabs her, erm, from behind. It’s a good, entertaining production, the acting mostly good, costumes fabulous, music brilliant. I’m a bit bothered by Tamora though; must all the women in the Globe productions be so annoyingly, screechingly overacted and juvenile? 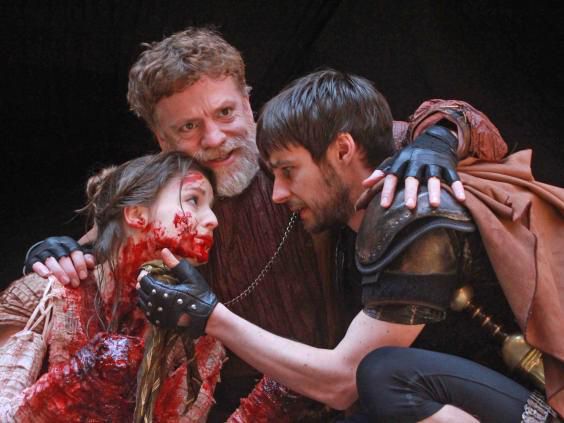